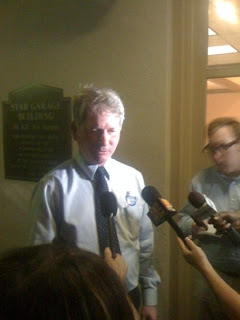 The Stonewall Democrats of Alachua County would like to offer our congratulations to City Commissioner Craig Lowe, who won yesterday’s runoff election to become both the first member of our caucus elected Mayor of a city and the first openly-gay Mayor of Gainesville, Florida.

We would also like to thank those who joined us in supporting his campaign. Similar to last year’s successful campaign to protect Gainesville’s non-discrimination ordinances for LGBT people (chaired by Mr. Lowe), his campaign for mayor of Gainesville is another excellent example of local, state, and national organizations successfully uniting for a common goal, including:

Responding Passionately
Individuals around the country responded with passion to news about the homophobic smears against Mr. Lowe. It is clear by the close margin of victory (42 votes) that homophobic smears played a part in driving enthusiasm for Mr. Lowe’s ultra-conservative opponent, but we are also heartened to see evidence that progressive Gainesville voters were emboldened as well, unwilling to accept such bigotry in our community.

Because the results of this election could have been reversed without the support of literally any one person or group, we the Stonewall Democrats of Alachua County cannot find adequate words to express our appreciation. We are humbled and indebted to everyone who joined us in this hard-fought election.

This post was revised on Friday, 4/16/2010, once the results were certified and Mr. Lowe’s margin of victory increased to 42 votes.